Ava Cigana La’agla – The Gift of Pure Being 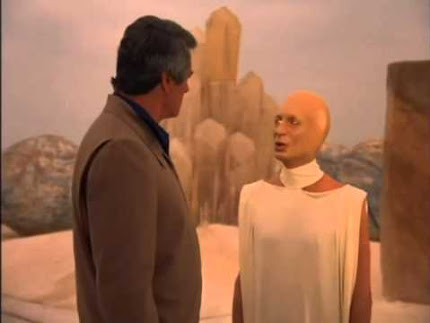 The Gift of Pure Being
An excerpt from the film of the Martian Chronicles by Ray Bradbury from 1979.

A Martian walks towards a human…
Human: “Hello.”
Martian: “La’agla?”
Human: “What did you say?”
Martian: “Ava cigana la’agla?”
Human: “I don’t understand you…”
Martian touches the man’s forehead…
Martian: “There, that’s better.”
Human: “You do speak English.”
Martian: “I do now.”
Human: “That must be the way you spoke to Sam…”
Martian: “Sam?”
Human: “He’s, he’s a friend… This is a wondrous moment!”
Martian: “Is it?”
Human: “Yes!” He stretches his hand out to touch the Martian’s shoulder…
Human: “My God! You’re a ghost!”
Martian: “What?” He reaches out to touch the human…
Martian: “Gods! You’re a ghost!”
Human: “Me?”
Martian: “You!”
Human: “No!”
Martian: “Where are you from?”
Human: “Earth.”
Martian: “What’s that?”
Human: “It’s a planet. Up there…” He directs his arm to a place in the sky.
Martian: “A planet of ghosts?”
Human: “I’m not a ghost, I’m alive! You’re the one who’s dead… your people were destroyed by a plague.”
Martian: “You must be mad.”
The Martian turns to show the human what he sees…
Martian: “Don’t you see this city?”
Human: “I see the ruins of a city. Dead over a thousand years.”
Martian: “A thousand years? I live here.”
Human: “Your city’s dead.”
Martian: “It’s alive… Don’t you see the carnival lights? The boats? The women? Can’t you see them?”
Human: “No.”
Martian: “You don’t see the city… and the ocean beyond?”
Human: “There hasn’t been an ocean there for over forty centuries.”
Martian: “This can mean only one thing… It has to do with time. You’re a figment of the past.”
Human: “You are from the past!”
Martian: “What year is it?”
Human: “Two-thousand-seven.”
Martian: “That means nothing to me. To me it is the year four-four-six-two-eight-five-three SEC… and you are long dead.”
Human: “But, but, I can feel my heart beat. Feel! No, never mind.” realising how pointless that would be. “I can feel my own flesh.”
Martian: Touches his own arm… “So to I.”
Human: “And I was hoping… finally…”
Martian: “Finally what?”
Human: “That I could speak to a Martian… ask quest…”
Martian: “Well here I am, speak to me. Ask. I’ll tell you anything you want to know about my world.”
Human: “Your world is dead.”
Martian: “It is your world that is dead.”
Human: “Perhaps… perhaps you’re right.”
Martian: “How can you prove you’re from the future? How do you know these ruins that you see are not the ruins of your own civilisation one-hundred centuries from now? You cannot know.”
Human: “You’re right. I cannot.”
Martian: “What does it matter anyway? Of what importance is it who is past, who is future? What follows will follow. Now or in ten-thousand years. All that matters is… you see your world and I see mine. Is that not enough? No matter what we each believe?”
Human: “Of course.”
Martian: “You look despondent.”
Human: “I guess I am.”
Martian: “Why?”
Human: “Because I’d hoped…”
Martian: “For what?”
Human: “For this meeting… such a long time… to learn!”
Martian: “To learn?”
Human: “Yes… about your people… your beliefs… the secret of your life on Mars…”
Martian: “Tier.”
Human: “Tier?”
Martian: “This is the planet Tier.”
Human: “Ah! y-yes… Tier.”
Martian: “Secret… there is no secret… Anyone with eyes can see the way to live.”
Human: “How?”
Martian: “By watching life. Observing nature and cooperating with it. Making common cause with the process of existence.”
Human: “How?”
Martian: “By living life for itself don’t you see. Deriving pleasure from the gift of pure being.”
Human: “The gift of pure being.”
Martian: “Life is its own answer. Accept it and enjoy it day by day. Live as well as possible. Expect no more. Destroy nothing. Humble nothing. Look for fault in nothing. Leave unsullied and untouched all that is beautiful. Hold that which lives in all reverence. For life is given by the sovereign of our universe. Given to be savoured… to be luxuriated in… to be… respected.”
Martian: “But that’s no secret. You’re intelligent. You know as well as I what has to be done. Now I must go. My people are waiting for me.”
Human: “I have people waiting too.”
Martian: “Good.”
They stretch their hands out to each other.
Martian: “Perhaps we’ll meet again… some other night?”
Human: “And I would like to see that carnival of yours.”
Martian: “And I would like to see the things you see.”
Martian: “Goodnight, …my friend.”
Human: “Goodbye.”
The Martian turns and walks to the crystal portal, raises his hand and then vanishes.