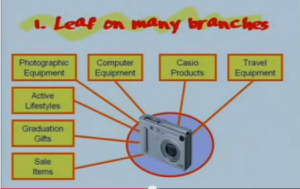 This video confuses knowledge with information (among many other problems). I was as brief as I could be. Congrats to those who take the time to read this.

@01:35– 10,000 years? Hmmm… hasn’t mankind been at organizing physical objects, ideas and knowledge longer than that?

@04:10– We can have more than one field in one spot at the same time. We can also superimpose objects, ideas and knowledge…

@04:35– Some things must NOT go someplace physically although they are physical: hunger, thirst, …

@13:13– Slicing among attributes is not useful unless an underlying context associates them. That is one of the reasons why you see miscellany.

@13:39-“Every attribute is a joint…”: only if you cannot associate these attributes with a surrounding context to place them in. Otherwise we have only data… miscellany.

@25:39-“There is no single way of organizing the world”: yet the ‘world’ does it quite nicely. We only run into trouble when we cannot or will not see the underlying structure in the organization. This structure cannot be separated from its form and function and still make sense.

@34:47– Post-modernism has been very successful in the deconstruction of the accumulated wisdom and culture of our ancestors. It replaces that wisdom with an artificial and contingent [one] which finally leads to nihilism. Our society is learning, fortunately, to grow beyond this movement and the hidden dangers it presents to our freedom, liberty, and sovereignty (personal and as a group) that we see eroding around us.

@34:59– You say post-modernists are correct in saying that the intent of an author isn’t as important as the reader’s decision about what their work is about! If we take this view seriously, then we subordinate the judgment of the creator of the work to that of a particular readership which, in effect, turns the whole relationship between them on its head! The readership can ‘measure’ the work according to any criterion it chooses, but the intention of the author is decisive for true meaning.

@35:17– You question the validity of believing the world is organized in one way. The general view is, however, that the world is organized according to its relationships to other parts of itself – whether recognizable to the observer or not. The choice of how that organization is interpreted depends entirely upon the one doing the observation. Nevertheless the inherent relationships do exist and are viable regardless of how we choose to look at them.

@43:55– You say the “world’s greatest expert” has become irrelevant. You pay tribute to the fact that [correct] knowledge is arrived at through refinement processes. The creator of an idea is never irrelevant; not even functionally! No matter how that idea is refined, the progenitor of the idea is just as important as any other ‘participant’ in that refinement process!

@44:11-“bugs get driven out of ideas through discussion…

@44:13-“through the public negotiation of conversation… That’s where knowledge is.” Knowledge however does not confine itself to being negotiated or even being correct and/or useful! Knowledge also encompasses much more than validity claims can confine. It is necessary to remember that knowledge and meaning are partners in the relationship they have with each other which may or may not involve truth value.

@44:43-“…It’s very clear that the mailing list knows more than any of the experts on it do…” (non sequitur)

The elements in your talk at this point seem to indicate that knowledge depends upon authority, judgment, negotiation and ‘group-think’. Is knowledge not more than these perspectives and interpretations? The use of language “the mailing list knows more…” suffers greatly. It is clear that you mean the members of the group know more as a whole than any single member (which is a truism).

@44:51– The John F. Kennedy assassination page of Wikipedia is offered as a specimen of knowledge and is used a precursor to what you @44:53 claim is a missing element of knowledge: Infallibility! This is an attempt to redefine knowledge, yet knowledge cannot be thusly defined as it can contain error too!

@44:33-“We know that Wikipedia is on our side.” Informed researchers are aware that Wikipedia contains, among its many strengths, many deficits. Not the least of those deficits is the bias found in much of its biographical information.

@45:41– The relationship of credibility to authority is also confusing. There are many cases where authority is wrong and incredible. Why do you not allow ALL knowledge to be ‘saved/captured’ as you allow with information? Should we not treat both equally?

@49:47-“Oh God! I hate myself.” That utterance, while most certainly meant as humor on your part, is inappropriate for anyone to say – even in jest. I thought you should know.

This entry was posted on Jul 22, 2014 by Heurist. It was filed under Fear and Control Paradigm, Mathesis Universalis, Science and Technology Run Amok .