“Freedom of Speech is a Privilege Intended for Educated Professionals” 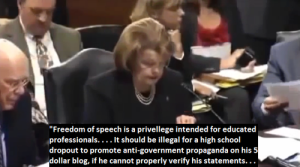 “Freedom of Speech is a Privilege Intended for Educated Professionals”
“It should be illegal… if he cannot verify his statements…”
This is what happens when ‘Authority’ has been perverted to cancel an inherent right of humanity!
Are these ramifications being considered in Google Search?

Google is making what I feel are really big mistakes right now basing its technology upon the work of people who promulgate fear-control based paradigms and archetypes. Google is creating a beast that will devour even itself! See this, for an example: https://plus.google.com/104704674433954659866/posts/Mw9BR6WZNSQ

Behind the desire to stop gaming of Search from the outside, they do not provide us with a guarantee that Search will not be gamed from the inside!

What if you are deemed unpopular or dangerous to the ruling power monopoly?
Will they still let you have a voice or will they call you ‘non-authoritive’ or claim you’re not part of the search results because of a programming error!

It’s also about trust:
I’ve programmed SaaS applications (basically, cloud applications) and learned the basics of that technology from a well-known university which I won’t name here.

I was often in dispute with the professor and his proverbial ‘disciples’ (until they began to ignore me 😉  ) about the failing code of ethics and guarantee of privacy in the SaaS paradigm. Now, more than a year later, they ‘magically’ have made small progress in that vein.

I still wouldn’t trust them with my data and you shouldn’t either!

The terms and framing they have chosen will not save them from the coming ‘disruptive’ (using their term – I would use the term ‘reharmonizing’ instead) technologies that are coming down the pike which are going to change things drastically for everyone in a constructive(!) way! Google’s framing now, in comparison with these technologies as they arrive, will become a ‘straightjacket’ for itself.

There are those who are aware of this coming time (it’s all approaching a critical threshold very soon) and are preparing for it now, by creating free and open source technology with regard to Search and based upon a completely different paradigm of trust, openness and distributed control by putting that control in the hands of the user themselves.
http://mathesis-universalis.com
http://yacy.net/en/
(for just two of them)

This technology will be coming of age in the next 2 years – provided our controllers don’t take what’s left of the playing field away – which they have done before.

This entry was posted on Jul 24, 2014 by Heurist. It was filed under Fear and Control Paradigm, Humanity, Mathesis Universalis, Science and Technology Run Amok .