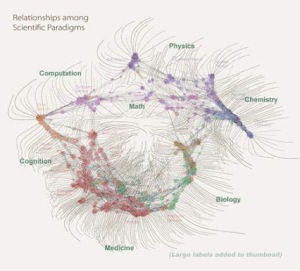 Knowledge Representation Foundations
It’s also stuck in ontological framing, but the approach and results are fascinating.

“This map was constructed by sorting roughly 800,000 published papers into 776 different scientific paradigms (shown as pale circular nodes) based on how often the papers were cited together by authors of other papers.”

“Links (curved black lines) were made between the paradigms that shared papers, then treated as rubber bands, holding similar paradigms nearer one another when a physical simulation forced every paradigm to repel every other; thus the layout derives directly from the data.”

Others doing work on this:
http://www.mapofscience.com/

Paper on Illuminated Diagrams:
http://www.textarc.org/appearances/InfoVis02/InfoVis02_IlluminatedDiagrams.pdf
(Also one in German that is VERY comprehensive!)
http://gerhard_dirmoser.public1.linz.at/Anwendungskontext_Diagrammatik.pdf

Introduction.
Manuel DeLanda. 2015. Philosophical Chemistry: Genealogy of a Scientific Field. Bloomsbury
“There is no such thing as Science. The word ‘Science’ refers to a reified generality that together with others, like Nature and Culture, has been a constant source of false problems: are controversies in Science decided by Nature or Culture?”

“Avoiding badly posed problems requires that we replace Science with a population of individual scientific fields, each with it own concepts, statements, significant problems, taxonomic ad explanatory schemas. There are, of course, interactions between fields, and exchanges of cognitive content between them, but that does not mean that they can be fused into a totality in which everything is inextricably related. There is not even a discernible convergence towards a grand synthesis to give us hope that even if the population of fields is highly heterogeneous today, it will one day converge into a unified field. On the contrary, the historical record shows a population progressively differentiating into many subfields, by specialization or hybridization, yielding an overall divergent movement.”